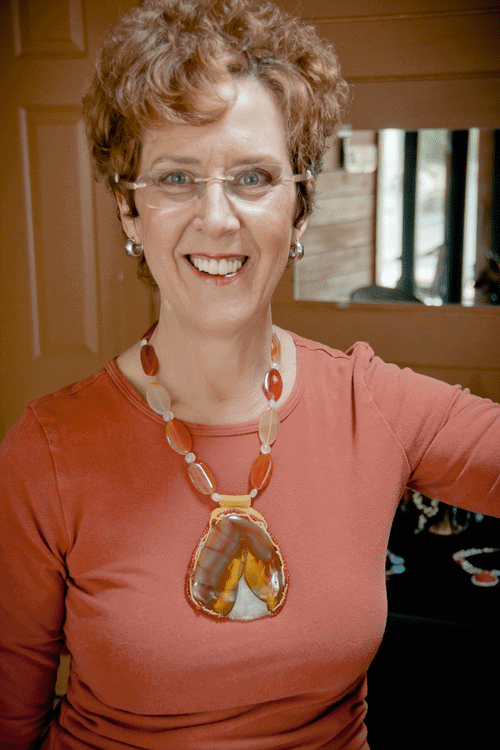 The bold necklace featured an unusual beautiful carnelian agate as its focal bead.

The center stone incorporated all the best colors of carnelian: red to dark orange to brownish. An unusual hazy clear quartz triangle at the bottom of this agate added spectacular interest to the piece.

Large carnelian ovals in the 24-inch necklace strand re-emphasized the color spectrum. Clear carnelian spacers separated each oval. (NOTE: The accompanying earrings featured one oval and a spacer on each end.)

Two rows of tiny carnelian rounds surrounded the agate, but the sameness of the reddish brown color didn’t provide impact. For that reason, afternoon-sun-kissed yellow delica beads played a contrasting role in my beadweaving. Small and perfectly formed, the delicas framed the natural stone, enhancing its beauty with their perfection and contrasting proportion. A peyote-stitched bail fastened the necklace to the agate. Yellow leather backing, cut to leave the triangle exposed, completed the center. A row of crystal beads lined the cut on the reverse side of the stone.

I affixed a sterling silver infinity charm to the backside in recognition of metaphysical powers of the carnelian.

Some Eastern countries refer to carnelian as a strength stone. Carnelian promotes optimism, confidence. When speaking, it can encourage courage and eloquence.
One of August’s birthstones, it represents balance and is said to enhance one’s analytical ability and perceptiveness.

Simply Carnelian makes a strong statement. It should. After all, carnelian is a powerful stone.