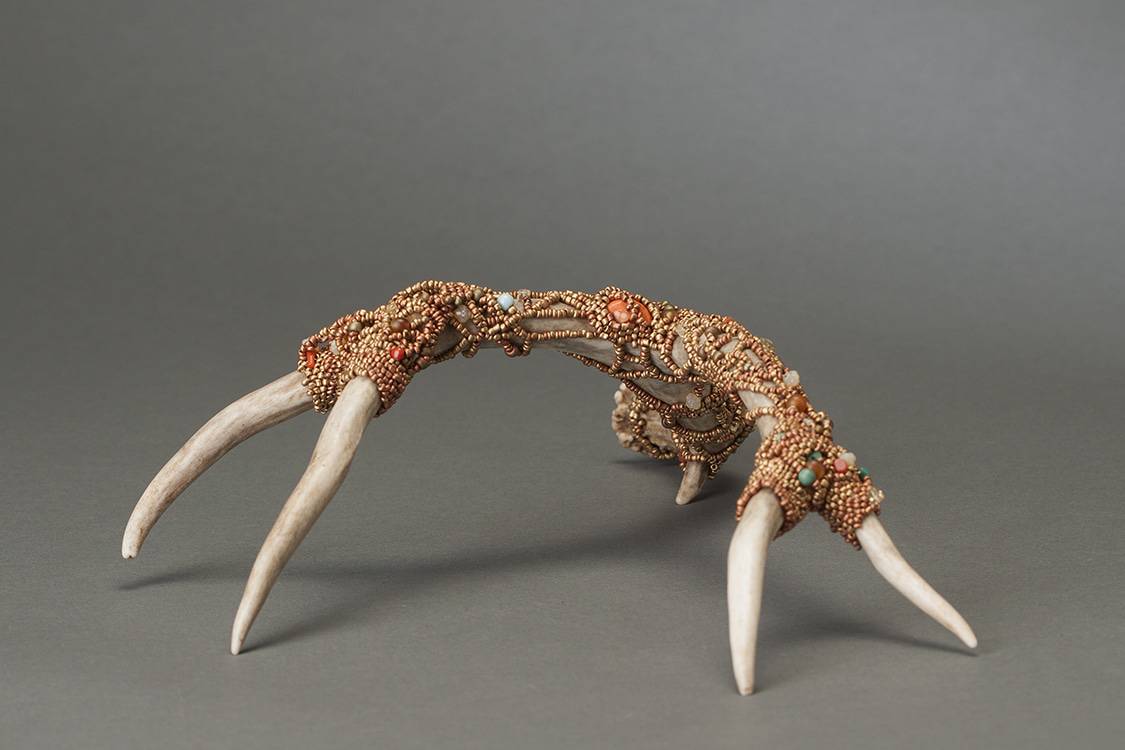 Could beaded antlers be the most unusual beaded object you’ve seen?

In New Mexico, mule deer shed their antlers during late winter or in early spring. Antlers, an extension of male skulls, vary in size with age, increasing annually before reaching maximum size. In this part of the country deer are plentiful.

I began using antlers for jewelry displays because it seemed like a natural fit for my tribal-themed creations. I draped necklaces over antlers at various shows. I hung bracelets from them as well.

I’m not prepared to disclose how many antlers I now possess. When does a grouping become a collection? How many objects must one assemble in order to be credited with a collection? The query interests me because many of us assemble, preserve or display like objects in our lives. My friend Ann has a collection of salt and pepper shakers. Margie displays kitchen crocks on the top of her cupboards.

Somehow, I have embraced a collection of rather unusual subject matter: beaded antlers.

Like many things, my obsession began with an experiment: “What would happen if I added leather and beads to this?”

My project received much commentary during the Sandia Heights Studio Tour. One visitor even returned the next day with two antlers he’d picked up during a walk around our neighborhood. (So, as you can surmise, my collection grew organically.)

Intrigued with the many ways of enhancing a natural object like antlers, I announced and completed a road project. More about that effort and one of my first beaded antlers in this 2016 post. 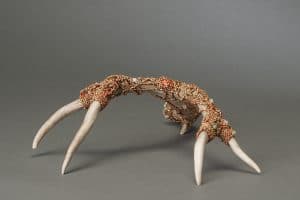 After I received eight dainty mule deer antlers as a birthday present, (Note the continued, organic growth of the collection) I obsessed about a deep purple set of beautiful colors beaded into my small, elegantly shaped antlers. Voila! It happened. 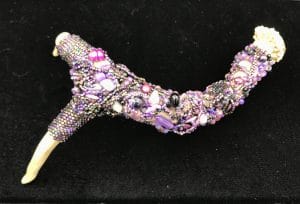 Since then, other beading enthusiasts have asked me to lead a class during which I’d share techniques for beading antlers. That’s on my list. I’ve also fielded calls about custom beaded antlers as well as other unusual objects of nature. These conversations about sharing beauty with beads make me happy.

Before I lead a class project, or do a custom piece, I have to add one more beaded antler to my collection. I call this Sunset on the Mesa. 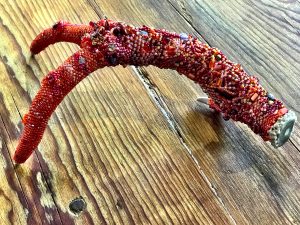 Could there be a pair of beaded antlers in your future?