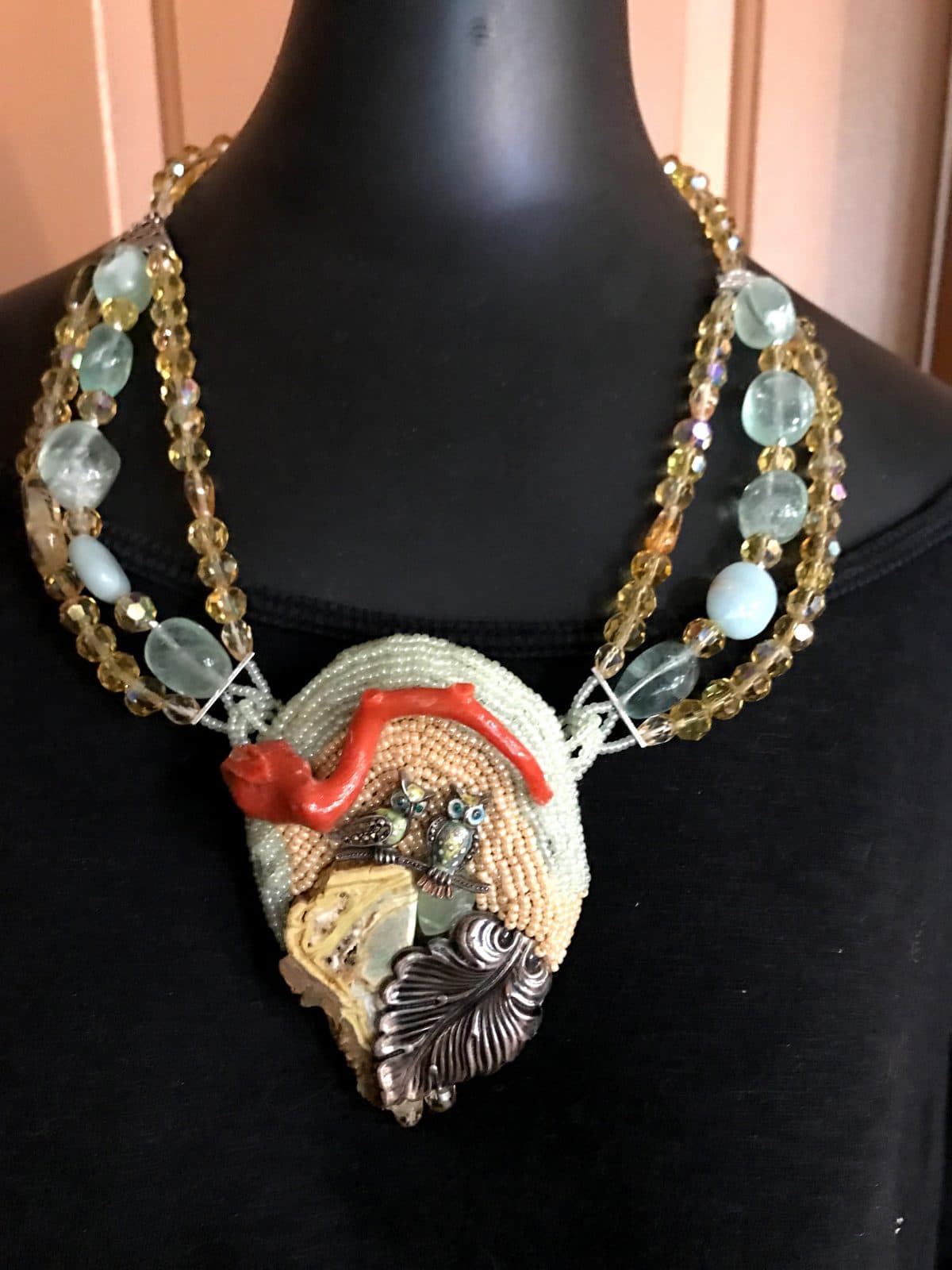 My brain wrestles with completion. In fact, it mangled this quote to imply some art projects were meant to be abandoned.

I found myself looking through boxes of projects and incomplete class works. Some had notes and plans. Others included beaded bits and findings. A few were barren structures. Obviously I’d lost interest in ever completing them and had used the parts for something else.

In the Beginning Stages of Completion

“What if you could forge a new and beautiful piece out of a family memento?”

Contemplating a stylized beadweaving to showcase a leaf and a pair of enamel owls, I concentrated on choosing just the right seed bead color, adding the perfect piece of natural coral to mimic a limb and building my focal. As usual, beading itself came easy. But then what? Stumped, beadweaving complete, I set it aside and went on to other projects.

The next time I revisited my owls, they seemed to need a deeper base, so I added beads and then once again set it aside. Aware of my ‘out of sight, out of mind’ problem, this time I placed the piece on top of my revolving bead shelf where I would see it daily.

Because I didn’t push for closure, the owls languished. I found it easier to start a new project (multiple new projects) than to finish this one. The commentary in my head assured me ‘inspiration’ would come. I waited for it to strike. Reviving interest proved to be more difficult as time passed. In fact, the right time never arrived. I conducted full conversations in which I argued the necklace would be too large, too complex, too difficult and I simply never restarted.

At last I confronted the procrastinator in me and called her to task.

“Your energy is part of this project,” my commentary began. “Until it’s finished there’s leakage.” That phrase got my attention. Looking to shore up personal performance I vowed to focus on completions.

As a part of the exercise, I wrote about three ways in which this unfinished project hindered progress.

First of all I confronted the lie of busy. Multiple projects lend an appearance of busy to one’s mind. In reality, there is nothing to show in the form of work to sell or submit for recognition Busyness is like treading water. As fast as you paddle, you make no progress. I re-visited my studio as an outsider might see it and considered perspective. The beginning sense of resolve kindled a fire in me.

Secondly I faced the myth of focus. My attention is fractured because I have not narrowed my focus. Instead I begin one thing, move on to another, get distracted by a third, etc. I remind myself that constraints augment creativity. I begin to list the UFO’s (unfinished objects) and estimate how long I need to finish each project. Next, using the leaking energy metaphor, I scheduled a meeting on my calendar.

Finally I looked carefully at my own accountability. I noticed a fear of or reluctance about completion, because of what comes next. Numerous excuses surface: this isn’t a good time, you don’t have a show anyway, that’s not a color currently in style, what will your friends think, etc. My growing sense of awareness found that looming truth: If it’s not complete, then I don’t have to hold myself accountable.

Project incompletion number one, my owls. There , nearly five years later, they sat, not giving a hoot about completion. With new resolution I assembled the pieces of my necklace on the bead board. No sooner had I chosen beads and findings then I discovered myself re-organizing the workbench. “Oh no!” I was doing it again. (The act of being busy was a substitute for my focus on completion.)

I fiercely tackled the engineering of this necklace. Using wire to weave three strands together at the base, I realized I’d forgotten to allow for a method of crimping the ends. Frustrated, I nearly walked away again. Instead, I gave myself a deadline and pushed forward. I used a technique of imagining what could work and trying it without pausing on feasibility considerations.

First the left side, then the right. I concentrated on the detail in each step, right down to recording the materials, assigning an inventory number, and photographing my finished necklace. 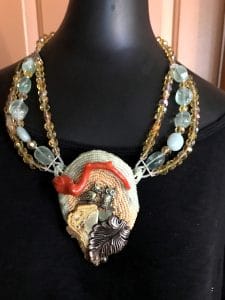 There is pride in the accomplishment and joy in the completion of this project. I celebrate for the moment and schedule my next completion. I’m stoked. This is cool. Onward. I’m inspired now because this list is going to be totally amazing when it’s completed. 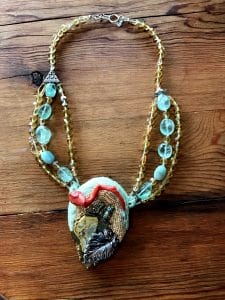 Where’s your fuel for creativity…completion anyone?