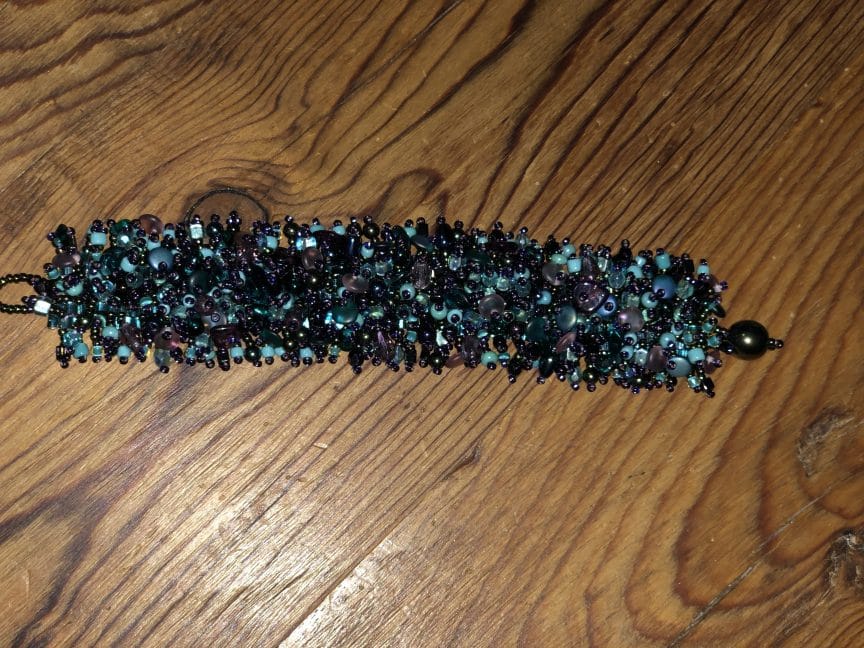 In the midst of a series of metal smith classes, I spontaneously started and finished a caterpillar bracelet kit using seed beads. You’d think I’d do more metal work – more hammering, sawing, filing – when involved in a metals class. Call me an anomaly, a deviation from the standard.

Instead of critiquing, I went with what was coming up for me. I felt a surge of creativity, a distinct flow. I beaded, created memory pins and meaningful charms.

As I felt into flow, I considered water and then waves. In general, waves resonate. Their even flow reminds me to stay balanced, focused. The wave-like motion of the caterpillar fascinates me, which explains my attraction to it.

My caterpillar bracelet kit arrived in the mail as a surprise thank you gift for an afternoon of creativity. The project colors – deep purple, metallic forest greens and teal sealed the deal.

The kit credited Kelly Wiese of The Bead Parlor, a bead maven I’ve yet to meet. Kelly’s beading talent is displayed in numerous awards and three books. Once again, I resonated with her colors of choice.

In the past, I might have nervously attempted to follow the pattern and experienced fits and starts. “I don’t follow patterns,” was/has been a common statement for me. The confidence with which I began my caterpillar bracelet kit project was new. It was as if I had a deep knowing I’d easily finish and absolutely love the process. There was no hesitation.

Although the pattern was specific, it allowed discretion in the choice of accent beads. Randomness adds to my delight. Good. I’ve grown to love experimentation.

Once the peyote-stitch base was completed to size, I added accent beads, picking up three main beads and then choosing. Dark colors next to lighter ones, fat beads near skinnier ones, longs added in for flavor along the way.

The joy of the pattern came from attention to detail. Small fringes added great significance. My caterpillar developed quickly and over the course of a few evenings, I finished a bracelet unlike any I currently possessed.

The bracelet draped perfectly across my wrist. I admired its heft, thinking the small beads were deceptively heavy.  What’s more, these beads were pretty, a pattern easily completed. I slung it on my wrist and headed for the bead meeting.