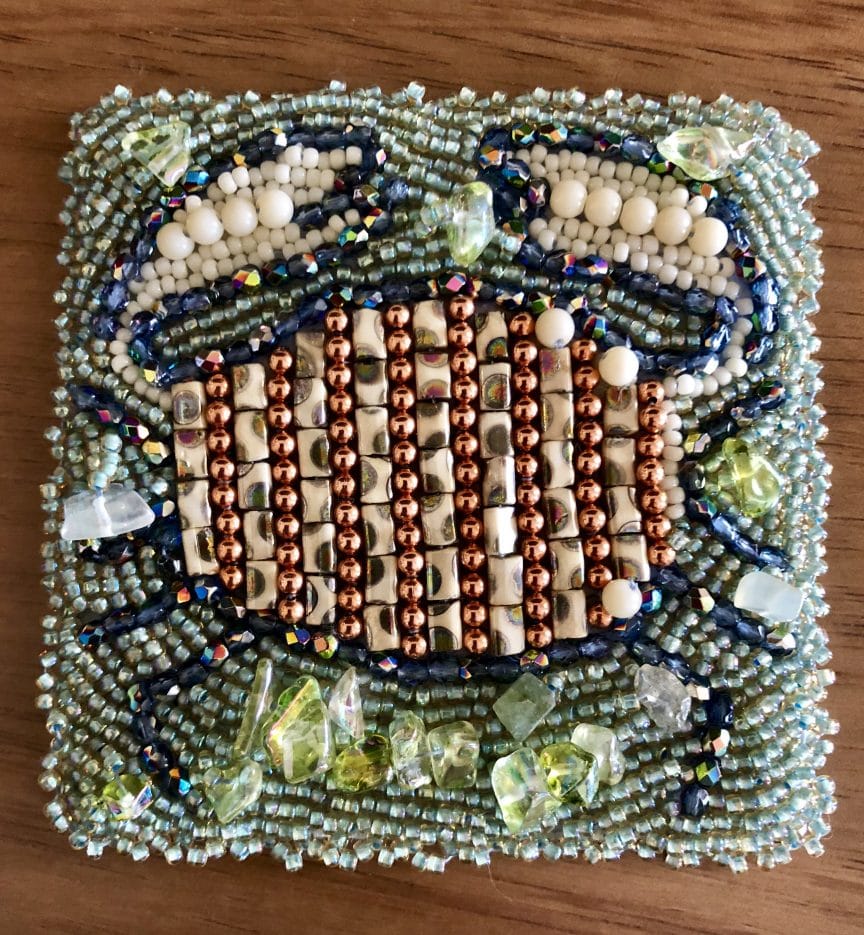 A recent Brews and Props project with my beloved Collaborheartists required me to create my astrological signed its element (water) in my primary medium, otherwise known as beads, beads, beads.

My July birthday is in the fourth sign of the zodiac, Cancer. Its astrological symbol is a crab. The element is water.

Determined to begin, I sketched a simple crab shape onto my backing and colored the background silver with a Sharpie. Next, I surveyed my stash for specific beads that I might use to translate the image. The idea of crab shells drew me to a glass rectangular bead with random spots. The lines in between the shells called out for a contrasting color like copper. Then, because I’d outlined my crab in sea blue, I selected an iridescent blue Czech glass bead for the outline.

Excited to see if it would look mesh, I began adding beads to the canvas. It was as if the crab wanted to stitch itself together in one evening. My shell shape began to emerge.

The next day, as I reflected on my work, I realized I might have over-stated my boundaries. My four-inch square should have been a three-inch one. Instead of doing it over, I elected to cut off the extra fabric. I marked a new line and without a backward look cut off the excess. This would mean less water for my crab to reside in, but so be it.

Four other members of Collaborheartists are in the process of making their own astrological sign. We will pull the five signs together in a special way with a centerpiece we’ve all agreed on. Other signs will include a sculpted one, a knitted one, a felted one, and an illustrated one. Follow this blog for more details.

The project is part of Brews and Props, an auction of artist-created propellers benefitting Angel Flight West, an organization of private pilots that flies New Mexicans in need of medical treatment. This is the second year that Collaborheartists have participated in the auction but our monthly meetings produce projects that frequently require consensus. Read more about our creative adventures in this earlier post, Group Creative Project Shows Consensus.