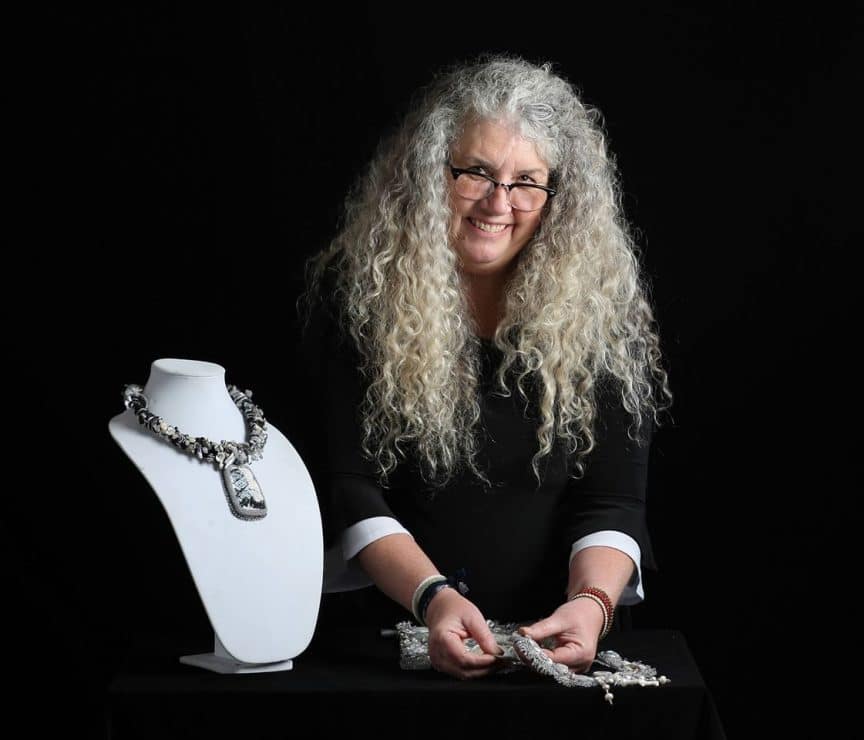 “My purpose is to share what I love to do with others.” 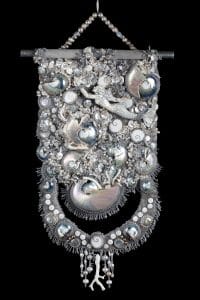 Stretching to Create Births the Unexpected

Jody used her Silver Mermaid’s creation to talk about “a fluke.” She’d been prepared to produce a mermaid collar until it morphed into two necklace pieces that hold to the wall. It wasn’t drawn out, but rather figured out.The result is that an individual can choose how long she wants it by simply taking magnets off the back.

This interactive piece of wearable art is soon to be a class, maybe one of the select few classes presented as one of two three-day retreats in Jody’s home.

Or, it may be an online class. Or, part of a book. She makes no secret of the fact that she’s writing a book entitled “Beyond the Boundaries with Beads” about raised texture techniques, those special Jody-Young-ways to create texture, movement and interest in beadwork.

Seventeen years ago no one was doing raised texture in beadwork. Jody wants it to be her legacy. She credits her love of nature with inspiration. It was water and the lure of the sea that pulled her to Maui where she was accepted as an artist in residence to five different venues. 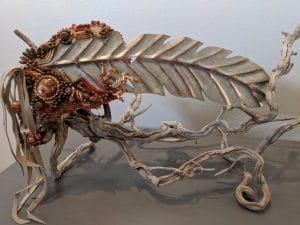 She’s also owned her own bead store, Beyond Beads Gallery, (the physical store closed when she moved to Maui) which is now an Etsy shop. Jody’s website Bead Art-Worth was inspired from a meditation about the meaning of self-worth. 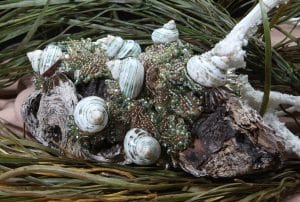 Throughout our conversation Jody’s commitment to share what she loves was readily apparent. I asked if social media marketing increased her success? She laughed and described the ongoing success of “Beyond the Boundaries with Beads, a Facebook Group for bead embroidery artists. There are no links and no advertisements on the page. It is merely a showing of beauty, a sharing of passions and creations where the comments are all positive.

The Beyond the Boundaries with Beads page, Jody’s sixth on Facebook, is more interactive than any of the others. Membership shows up and continues to grow. In a recent weekend, another 20 joined the group, already over 500 strong. It’s yet another example of independent thinking as Jody tries to change Facebook into a positive thing.

Bead Embroidery is the foundation

It all started her grandmother and with embroidering her jeans in the 9th grade. Pragmatically, Jody says she’s blessed to have both a business and an artistic mind. She says, “I live in my own world. I don’t watch the news. I know my purpose — to share what I love to do with others.

“It’s my students who really inspire me,” she says. She then adds: “Sherri Sherafini inspires me too, even though I’ve never taken a class from her.”

Who inspires you as a bead artist?

Disclosure: I first met Jody Young in Tucson at To Bead True Blue in 2016. I took her Beauty of the Sea and Conversation Stick classes. I’m also a member of the Beyond the Boundaries with Beads Facebook Group. In following Jody’s art, I continue to be inspired with colors, techniques and ideas from this gracious lady.