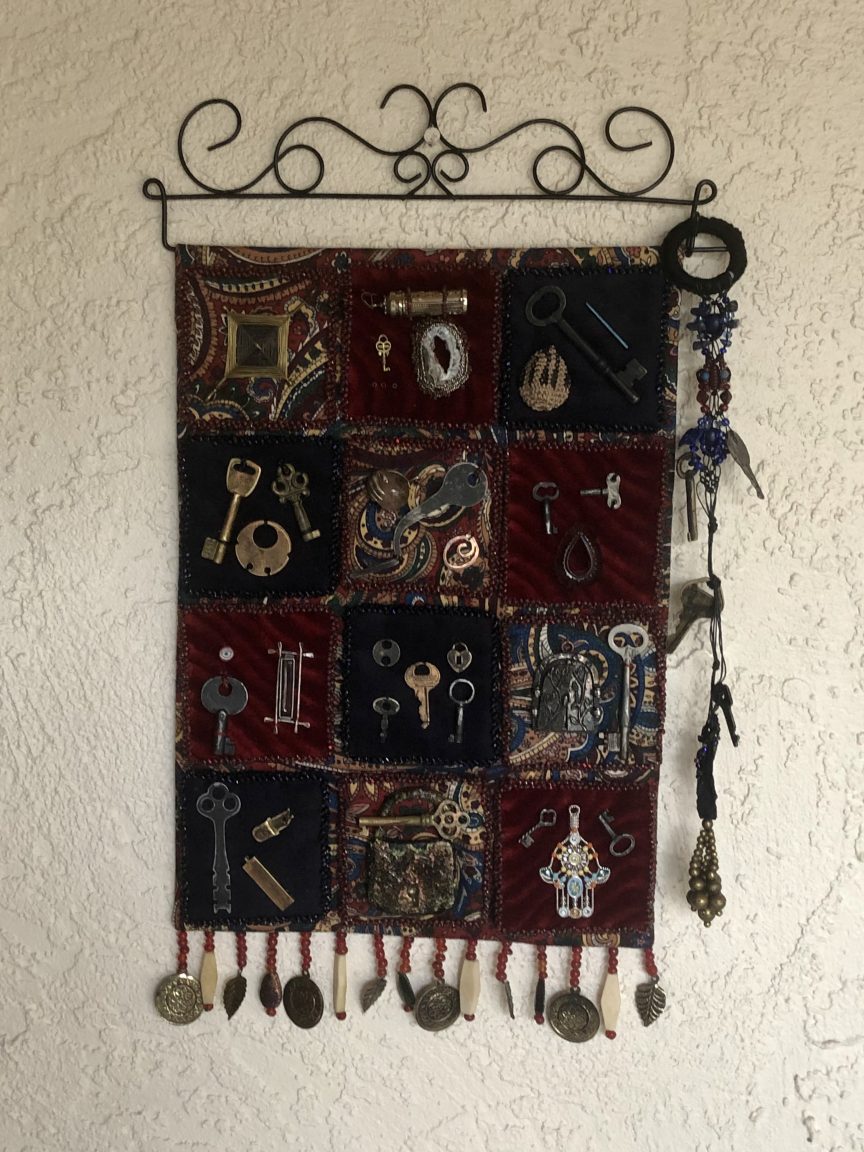 As a little girl, I loved my grandma’s front door key. It seemed special, unlike anything I’d ever seen. With extra curves and facets, Grandma Aggie’s skelton key was indeed one-of-a-kind, as were the French doors off her living room. Magical possibilities could surely be accessed by stepping through those doors. Alas, at the time, those doors were locked to me.

Similarly, one of my favorite college graduation gifts, a small frame of a gold key mounted on red, still hangs in my office. Sharon, a mentor from the college radio station, told me it was the key to success.

For a time I focused on the key as a bullet point, an imagery that I used in every Power Point presentation.

Those and other treasured memories prompted my pursuit of Keys and Openings. During the seed period, a time in which I gathered a myriad of pieces for “A Few of My Favorite Things,” I contemplated how I would present thoughts of keys.  (Read more about the class here.)

The possibility of openings intrigued me to take note of gates, windows, frames, peepholes, eye of a needle, and, of course, locks.

A key opens all manner of things, from diaries with our deepest thoughts to storerooms and treasure chests. Keys turn on car engines and open padlocks. Even some digital items require keys. Master keys unlock all the doors in a house or building. In the past, women wore keys to the linen closet where the family wealth was stored. I’ve heard references to the wealth of a man, as told by the number of keys he carried and I recall the pride of an uncle in his many keys.

A deep dive into what matters about keys surfed on meaningful symbology including keys to freedom, keys that unlock depths of thought, keys that are portals to parallel universes, and keys to my heart.

One of my favorite associations is that of a key that unlocks a window with a view.

In a nod to my fascination with keys, skeleton keys in particular, many of the keys for this project were nearly antique or most certainly unusual in their shape and form. As is the case with much of my art (heART), my friends helped collect items associated with a project. I was gifted with a variety of old keys (sequentially numbered) from the coop gallery to which I’d belonged.  Then, Marianne from the studio brought me a box of older keys. What a luxury to experiment with them, adding patina to metal, filing, and finishing color with metal paint. I glued bling to some so they could become charms or focals on necklaces.

Feeling flush with keys, I shared some of the extra keys with my fellow participants during our class. As is so often the case, that generosity was immediately repaid when the following week a friend texted me this message: “Can you use some of these keys?”

My stash now includes a box labeled “keys” sure to come in handy for some future heART design.

What comes to your mind with my mention of keys and openings?